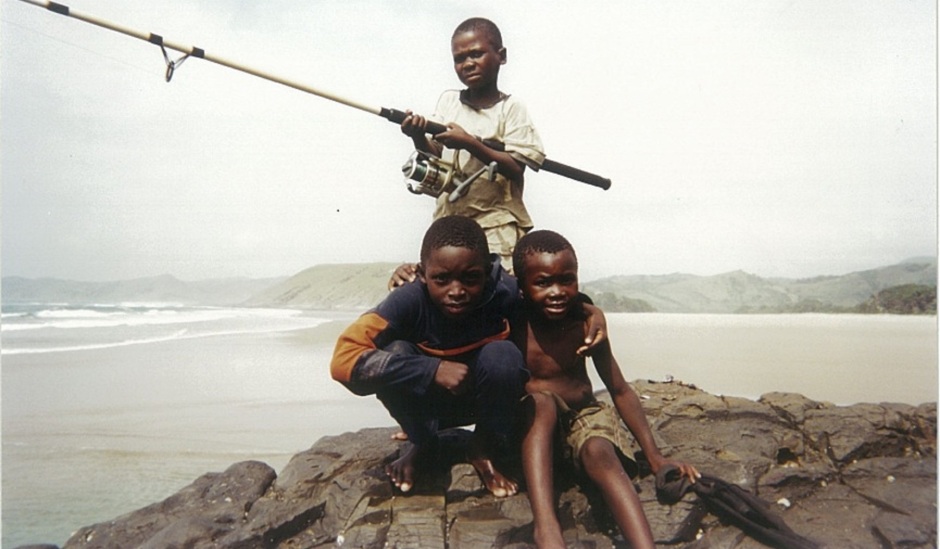 WISEMAN IN THE TRANSKEI

I’m twenty-nine years old, on a three-month journey through Africa, with little more than a soccer ball and a fishing pole.  Today, I’m looking through the window of my white and green hut, observing the South African coastline.  I try to imagine what the day’s catch will be.  I’m told the sharks, kingfish, and cob are abundant in these waters, but the night holds me secure in its arms, as I try to squirm free.  The sun rises above the water; the light releases me into the journey.  I maneuver down the hill, and arrive at the rocky shore, where goats stumble around, looking out of place.  They are spooked by my presence and quickly scatter.  I work my way across the rocks, down the white sand beach, approaching the next hill, where a point stretches out into a clear pocket of water.  Two cows walk through the deep sand, a young African boy pushing them along with a flimsy stick that sags at the end and serves as a whip.  I wave to the boy, who is happy to return the gesture.  With his chest pushed out, he proudly moves forward with his animals.

Walking across the rocky point, I stop and look into the jungle blanketing the hill next to me.  I listen to the orchestra of birds and see glimpses of brightly colored feathers darting through thick layers of vines and vegetation.  After arranging my fishing tackle, I launch a cast into the turquoise water and secure the rod between two rocks.  I will play the waiting game as long as necessary, I tell myself, convinced I will leave Africa with the memory of a trophy or two from the sea.

Hours pass, the sun bouncing off the water, warming my skin, then two black faces pop out of the water and drop back down.  Intoxication of sunshine is my first thought, but they appear again, this time with loud white grins on their Xhosa faces.  I lunge toward them, as though chasing them down, and they duck back beneath the water.  We play this game a few times until they pull their bodies over the rock ledge and begin their investigation of the white boy, fishing on their point, on their beach, in the heart of the Transkei.

The boys take their time getting close, but eventually settle within a few feet, one of them looking at me with a familiar stare.

“You want my shirt, don’t you?” I ask him, but he doesn’t comprehend until I pull on the shirt and point to him.  He nods.

“If you get me some bait, I will give you my shirt,” I tell him, but he doesn’t understand.  Before I can point to the hook on the end of my line, an older boy steps out from behind the rocks, takes my Swiss Army knife, opens it up, inspects the blade, and dives into the water headfirst.  I look over the edge, but can’t see him; I can only hear the scraping of the sharp blade on the barnacles and rock bedding. The boy surfaces with a handful of bright orange flesh.

“This is good bait,” he assures me in English, which catches me by surprise. “But you are fishing in a very bad spot,” he says, then translates his comment to the younger boys, who laugh.  “Let’s go, Wiseman will take you there,” he says, and with a name like Wiseman, I decide to listen.

We walk back across the beach, the younger boys touching my skin and stopping to perform cartwheels, demonstrating a fluid motion coupled with immense strength for their age.  The cows are now sitting in the white sand, their brown hides glistening below the sun, their owner leaning up against them with his arms crossed.  Birds are laughing in the jungle.  Wiseman leads us across a bed of reef and my feet are speared with the spiky points sticking out of the rocks, piercing through my sandals.  I slow down to look at the boys, who are barefoot, calmly walking ahead.

“Send me your line,” says Wiseman, attempting to bait my hook.  I’m starting to feel like a pathetic tourist, so I decide to take the line from him and perform the ritual myself.

“Cast your line there,” he says, pointing to a patch of metallic blue water swaying above a ravine of stone.

I cast in a different spot and watch Wiseman prepare his line, attach it to a stick and walk out to a precarious section of reef, where two older boys are fishing.  I try to focus on my angling efforts, but I see Wiseman dancing on the reef, in the same rhythm as the other boys.  They bounce one foot twice to the right, striking their bare skin on the reef and repeat the process on the left side.  Waves crash against their bodies, nearly pushing them off the ledge.  The two older boys hook fish and guide them into the shallows like puppeteers, then slide them onto their stringers.  I watch them land over ten fish, dancing, absorbing the weight of the fluffy white wash, and making my twelve foot fishing pole feel out of place, like a rental car in a village town.  I don’t hook a single fish.  I reel in my line, having lost my bait for the fifth time, when Wiseman walks over to me after landing the largest fish of the day.  I swing the rod over; he catches the line, and baits my hook.  I spend the next few hours sitting with my new friends, without a shirt, calmly admiring the African sea.

iThere are no comments

This site uses Akismet to reduce spam. Learn how your comment data is processed.