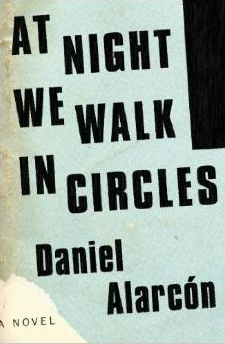 Daniel Alarcón’s At Night We Walk in Circles begins when a young actor, named Nelson, finds his life spiraling out of control.  His father is dead. He lacks familial support since his brother lives in the United States, and his girlfriend has left him for another man.  In a seemingly fortunate turn of events, Nelson is granted the honor of touring the countryside with his hero, the playwright Henry Nuñez.  Nelson will star in Nuñez’s legendary play, The Idiot President.  As he travels, Nelson learns more about the dangers that once surrounded this play and its cast, collectively known as Diciembre.

Years ago Nuñez had been arrested under the suspicion that his play was causing civil unrest and making a mockery of the unidentified country’s president.  In some of the towns Nelson visits with Nuñez and Patalarga, another member of Diciembre, we learn that not everyone is pleased with the play’s revival. Nevertheless, the three men are determined to finish the tour if only to escape from their real life difficulties by entering an imaginary world through acting.

Most of this book is told from the perspective of an interviewer, but the identity of the narrator is not clear until the end of the Part I.  The shifting between other characters’ perspectives as well as between present and past incidents can be a little difficult to keep up with at the beginning of the story, but I picked up on the pattern by the halfway point in the novel.

Each character is clearly defined and carries that tragic hope that is often associated with artists.  This text is about beauty and pain, truth and fiction, tragedy and life.  Alarcón constructs beautiful love stories between a young man and his idol, a young man and his first love, a convict and his cell mate, a playwright and his play, and, finally, an actor and his character.  On almost every page, the reader perceives love being shared, being whispered, being forgotten, being kept secret.  But no other love eclipses the love that these characters express for their unnamed country.

In a brief conversation about the upcoming trip, Nuñez and Patalarga discover that Nelson has never before traveled.  When the former muses over the “life in the mountains,” Nelson asks, “What was it like?”  To which, Patalarga responds, “Bleak [ . . .] And beautiful” (43).  Before this brief conversation, the narrator better described the trip north in language that, I believe, conveys admiration for the land itself: “Everything got stranger once you rose beyond an altitude of four thousand meters, that supernatural threshold after which all life becomes theater and all theater Beckettian.  The thin air is magical.  Everything you do is a riddle” (43).

This description, combined with Patalarga’s words (“bleak and beautiful”), might be applied to the novel itself.  The further along one travels with Alarcón’s characters, the greater the sense of sadness.  The reader is filled with a sense of foreboding.  Yet, in spite of its bleakness, Alarcón’s narration speaks to the beauty of Nelson’s experience.

As Nuñez says, “[W]e’re entering the world of the play now—its constructed universe” (82).  I would second this advice in regards to Alarcón’s At Night We Walk in Circles. Read the novel.  “Give into it” (82).

iThere are no comments

This site uses Akismet to reduce spam. Learn how your comment data is processed.