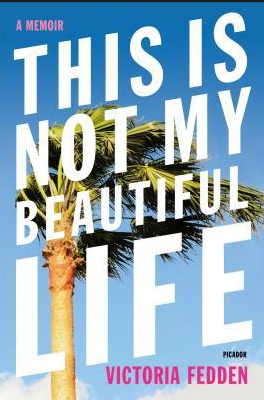 A while back, I was preparing a syllabus for a class I was teaching on writing memoir. I planned to have the class read excerpts from a variety of authors, Mary Karr, Tobias Wolfe, Jeannette Walls, Maya Angelou, etc., all accomplished writers, and all of them survivors of various forms of trauma. Trauma doesn’t guarantee a good narrative, but it does offer some rich material to work with. As my friend The Writer says, “Never waste a crisis.” Still, there are as many ways to approach that material as there are to host a dinner for family and friends. I wanted to provide the people in my class with texts that used humor as well as angst to deliver life stories.

Thank God I finally discovered This Is Not My Beautiful Life, by Victoria Fedden. Trauma? Check. Humor? Check. Dinner with family and friends? Check. Epiphanies? Check. I’m a sucker for a great first line in a book and Fedden did not disappoint. “When the Feds raid your house (or my parents’ house, in this case), they like to take you by surprise” (3). How could I stop reading? Talk about Chekhov’s gun. But even before the first line there is a page with a diagram of her family tree that looks like something out of Faulkner. Ashley, the woman raised as her sister, is really her aunt, and raised by Fedden’s mother Cecily and her stepfather Joel. Fedden’s birth father abandoned her when she turned eleven and moved in with her mother (who’d sold drugs to pay an attorney to get custody). But that was back in Delaware, where several of her five half-siblings live. The memoir begins in Florida, a sunny place for shady people.

Fedden’s book takes off instantly from that first line when she (nine months pregnant) and her husband were staying at her parents’ home Casa de Sogni, the house of dreams. Everything about Fedden’s parents is extravagant, over the top, and done with exuberant delusional naïveté. Cecily is fifty-five years old, apple-shaped with a platinum-blonde weave, and apparently she wears a lot of leopard print. Joel is Israeli, tall, black-haired, with blue-green eyes and red Prada loafers. Their home is overflowing with friends, neighbors, hangers on, and random sketchy people. Of particular note is Skip, who becomes Baron Von Bod, a gigolo and porn reality star. Joel and Cecily once allowed a pornography production company to shoot scenes for the film Hungarian Titty Explosion on the twenty-thousand-dollar designer couch. Fedden is rebuked by the Baron early in the memoir for being a spoiled brat, no less a moocher than the rest of the dodgy guests. Fedden is understandably affronted.

Cecily is arrested and when she returns to the Casa with an enormous sandwich from Panera, she informs Fedden that she has been charged with conspiracy to commit wire fraud. Cecily had been working in her home office dealing in penny stocks. Her assets are frozen, except for one account with a balance of five thousand dollars. They know the Feds will find this account by the next day, so they make a Costco run, throwing in cases of lobster tails, beef tenderloins, and other luxurious staples. They need these for themselves and also for their guests—Michael Bolton once came for manicotti.

Fedden and her sister/aunt Ashley are both pregnant and deliver their daughters, Emmaline and Amelia around the same time. They also live next door to each other in the same neighborhood as Cecily and Joel. Sibling rivalry is among the significant family issues that Fedden confronts as her parents are arrested, deal with lawyers, judges, and then former friends ratting them out. Ashley’s ease in delivering her baby, the way Amelia is a laid back infant compared to the screaming Em, the instant success Ashley achieves with yoga, all add to Fedden’s factory-installed insecurities and post-partum depression. Fedden is wary of attempting to be more than superficial Facebook friends with her half-siblings. She is anxious about what her husband Ben’s parents will feel about her and her family if they discover that Cecily and Joel are accused of bilking people out of hundreds of thousands of dollars. Cecily and Joel maintain their innocence throughout and consider their accusers jealous of their success and hard work.

The cases against her parents, and her sense of obligation to be there for them and help them, inflict stresses her marriage, which is already strained by the introduction of her baby and her husband’s frequent travel for work. Her sense of competition with Ashley is mixed with a desire to be besties. Although doubtful of her ability to strike and maintain yoga poses, Fedden accepts Ashley’s invitation to join her in a class. Ashley proves a natural and Fedden again feels inferior. The two women differ also in the ways they cope with Joel and Cecily’s arrests and the changes that follow. Ashley and her husband Andrew withdraw somewhat from the family drama in an effort to preserve their own family. Fedden learns to accept Ashley’s distancing as her way to set boundaries and is also grateful to her for introducing her to yoga practice, which though at first is yet another thing to fail at, becomes something Fedden comes to depend on as a source of self-care and growth. Fedden finds other women who become her best friends.

In rendering the upheaval of her family, Fedden braids a tapestry of familial love and responsibility that considers questions such as: Who is your family? What do you owe them? What do they owe you? What if your parents are convicted and miss their granddaughter’s childhood? This Is Not My Beautiful Life addresses the difficulties of a woman whose identities must shift to accommodate new realities and old messages of inadequacies. What if Baron Von Bod is right? Her record of this time in her life, a period of several years, moves from shock and sorrow to acceptance and growth all the while she is a witness to a fall worthy of Greek tragedy performed by a cast of characters who seem more at home in farce.

Fedden, Victoria. This Is Not My Beautiful Life. Picador, 2016.