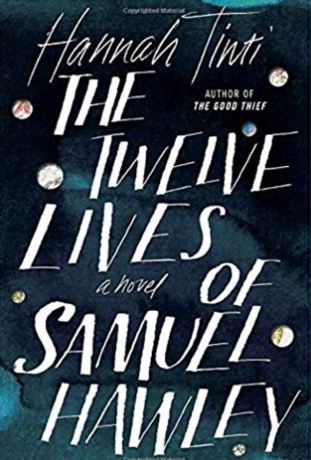 In the midst of the stress of sending out countless job applications following my graduation, I found Hannah Tinti’s novel, The Twelve Lives of Samuel Hawley. The book’s cover caught my attention at once: twelve small holes of various sizes in its jacket expose a glimpse of the beautiful and aptly titled painting underneath, Harmonia Macrocosmica, by Andreµ Cellarius, circa 1661. My love for the classics—the great Russian, German, and British writers—often prevents me from giving contemporary writers a try, but Tinti’s book seemed to deserve a chance just for its cover.

While Tinti’s previous novel, The Good Thief, introduces an orphan whose only connection to his past is a piece of an embroidered collar with the initials REN, Loo, the protagonist of her second novel, lives with her father, the eponymous Hawley. Loo cannot remember her mother, but forges an emotional connection to the woman’s only remaining possessions, like a worn-out picture, some used toiletries, and a robe.

Just as the holes of the book’s jacket both conceal and reveal, Hawley conceals and reveals only bits of his life to his daughter. The chapters act simultaneously as independent short stories or vignettes to expose Hawley’s past and help Loo find out who and how her mother was. When I started reading this book, the first sentence somewhat threw me off, because it immediately starts with, “When Loos was twelve years old her father taught her how to shoot a gun” (3), and I did not expect that Hawley, who confesses to the crimes he committed, would ultimately express love for his wife and his daughter Loo.

Each chapter peels away more of the mysteries surrounding Hawley’s past. Each bullet hole in his body tells us about a moment of his life; these moments develop Hawley as a character, as he reconnects with Loo, whom he left with her maternal grandmother to mourn for Loo’s mother. Loo also discovers herself. She resembles her mother Lily, physically and emotionally; this explains even more why Mabel, her maternal grandmother, tries to separate father and daughter, as she believes Hawley killed her daughter Lily. Tinti successfully unwraps the layers of mental armor Hawley wears to protect his daughter Loo, and the reader eventually can feel that his whole existence rests on Lily and Loo.

Hawley meets Lily at a diner. Hawley waits to drop off a satchel to an associate, while Lily waits for a meteor shower called “the Perseids, because the meteors look like they’re coming from Perseus” (125). This detail connects directly to the book cover, loosely to all the killings in the book, and also to Hawley’s fascination with Lily. Lily wears a pair of black lace gloves, which she strips off her hands to eat; later in the book Loo takes these same gloves from Mabel to have a piece of her mother. Loo understands that these small artifacts of her mother’s life tell her story just as the bullet holes tells her father’s; each item represents a part of Lily and despite Mabel’s thoughts that only she owns Lily’s memories, Loo demands her place as Lily’s daughter. So after stealing them from Mabel, “[she] slid [her mother’s gloves] onto both of her hands and pressed her fingers against her eyes. The black lace clouded her vision, as if she’d opened her eyes underwater” (81). Here again Tinti controls the sequence and the amount of detail Loo finds out through the physical possessions her mother left behind just as the lace controls what Loo sees. While Mabel keeps Lily’s things to live in the past, Loo longs to explore her mother’s life to move into the future.

Tinti portrays not only the bildungsroman of Loo, but also that of her father, Hawley. The interwoven plotlines highlight the similarities between Loo and Lily. This book exposes and explores human nature through its characters’ strength and flaws, and ultimately Tinti succeeds to unravel the threat that weaves this story to keep her readers curious for more.