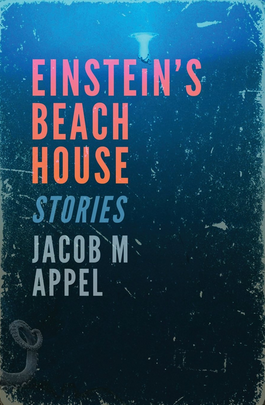 I read Jacob Appel’s collection, Einstein’s Beach House, in a single evening, staying up into the single digits to finish it. Appel’s prose has a springing energy that buoyed me through the often comi-tragic, even fatalistic plots, a pace that is apparent from the collection’s opening sentences:

That year Lizzie’s kid sister kept a list of things that were funny when they happened to other people: tarring and feathering, Peeping Toms, mad cow disease. The rare encephalopathy from which their father suffered didn’t actually come from eating infected cattle, it turned out, but from a spontaneous somatic mutation—what Bill Sucram’s neurologist described as “losing the genetic lottery”—yet the ailment was enough like mad cow that Lizzie’s mother swore off  animal products. Overnight, Myra Sucram stopped fricasseeing duck and took to ordering exotic soy dishes from a newly opened kosher-vegan deli on Walloon Street. (“Hue and Cry”  1)

Sentences like these dare you to say “spontaneous somatic mutation” fives times fast. But there in the syllabic tangle are several central issues in the story, and in the collection: How does one make sense of injustice? How do communities mete out justice? When is forgiveness, rather than real or metaphorical tarring and feathering, appropriate? Characters in these stories wrestle with angels in the gray area between schadenfreude and empathy.

Appel’s stories seem grounded in real places, most often New York and nearby suburbs, but the plots sometimes stretch into fabulism. In “Paracosmos,” for example, a father who works as a public health officer seeks to name his daughter “Quarantina” (Tina for short) or “Malaria Malansky,” while his wife seeks a traditional name like “Victoria.” The pair settle somehow on “Eve,” perhaps the most dangerous name of all. If Adam named all the real animals in the Garden of Eden and found himself still lonely, the Malanskys’ lonely daughter Eve may be a conjurer who gives life to—not the imaginary friend, but the imaginary friend’s father, who arrives at the Malanksy home one afternoon.

In Appel’s collection, stakes are never as low as they seem. In the collection’s titular story, a tour guidebook erroneously gives a family’s home address as that of Einstein’s former summer dwelling. When tourists show up eager to view the house, the down-at-heels father charges fees for tours, a dishonest, but perhaps one that seems harmless enough. But Einstein’s niece soon arrives, declaring that she has been swindled out of her inheritance—and the deed of ownership to the house cannot be located.

Forgiveness and charity are hinges upon which many stories turn, and often these ideals struggle against responsibility and ownership as personal and community values conflict: Will the dying man’s neighborhood join him in welcoming the new neighbor, a sex offender recently released from prison? Will the female rabbi compromise the sanctity of the synagogue to help her former lover succeed? Each story offers at least one character an epiphany, but the price is often innocence.

Appropriately, then, many of the stories, like “Einstein’s Beach House,” “Hue and Cry,” and “The Rod of Asclepius,” are focused through young characters who love deeply flawed parents. The stories are brief but powerful bildungsromans, in which the characters witness their parents’ mistakes—some horrific, some almost whimsical errors, yet all devastating.

The stories seem so thematically and stylistically unified that the occasion verbal reminder that this is a collection seems unnecessary. The reappearance of a hedgehog from “La Tristesse des Herissons” to “Einstein’s Beach House” via the outrageous speech the increasingly frustrated father’s gives about Einstein for tourists (“He was bitten by a mad hedgehog as a child and never got over it,” p. 112) is the most jarring case in point. The fact that the collection features two stories about former romantic partners squabbling over their pets is another minor complaint. Still, this is an outstanding collection, never providing too easy a resolution, with stories that don’t ask why bad things happen to good people, but rather reveal the ways imperfect but well-intentioned people cope with an inscrutable universe.

Twelve Women in a Country Called America was my first experience with the work of established writer, Kelly Cherry. Cherry’s collection of twelve stories obviously focuses primarily on female characters, and, as the epigraph from Norman Mailer suggests, most of the stories are set in the American south.

Whereas I bounded through Appel’s stories in a single evening, Cherry’s work I absorbed more slowly. The stories felt more ponderous somehow, possibly because Cherry’s third person narration leans a bit further towards omniscience than Appel’s, or possibly because Cherry’s work provides more philosophical reflection. “The Piano Lesson,” for example, starts with its youthful protagonist’s reflections: “Music is a mystery, the way it speaks without words, telling you what your heart thinks” (131). The third paragraph is a description of North Carolina waterways, and the fourth and fifth paragraphs include Jessie’s consideration of how time works: “The past…was where history was. And she could understand that. If history wasn’t in the past, it would keep getting in the way. We’d be constantly bumping into dead kings and fighting wars that had been won or lost long ago” (132). While Jessie’s concern about time is picked up throughout the story and comes to a nuanced conclusion, in which parental notions about childhood innocence conflict painfully with the reality of children’s knowledge of life and death, I found lengthy openings like these less to my taste than the beginnings of others in the collection, like “Famousness” and “False Gods.” While the first lines of “Mother’s Day” defy greeting card expectations, leaping nimbly through its heroine’s short bio into a description of her extramarital affair (“Carolina Severn, arts administrator, wife to a successful physician and the mother of two grown children, a fixture in the city’s cultural life, giver of sparkling dinner parties, left her office in downtown Charleston at noon each weekday to go get laid”), the plot at times lulls for scenery-inspired meditations:

Charleston smells of the sea—the open sea. Perhaps it was the salt of adventure, the history of  seafaring, that stimulated Carolina’s appetite for risk. Pirates had done their dirty work here, had had dealings here. When the sun is out, and it usually is, the city seems to have been shot in Technicolor, or whatever Technicolor is called now. A reggae of birds, a slow shuffle of dogs seeking shade are the background music. It is a bright, colorful city that flutters at the edges and corners and in cul-de-sacs, where poets and painters—and dancing girls—and boys—rejoice, for they have escaped being labeled misfits, which is what they had been deemed growing up.  (111)

Such musings slowed the plot more than I prefer, and, because they consistently pepper the stories, make it difficult to separate the narrative voice from the characters’ own contemplations.

What I appreciated most about Cherry’s work was how, in it, unlikeable characters, even cruel women, still received some measure of empathy. The most challenging two short stories in the collection for me were “Au Secours” and “The Piano Lesson.” In the first, a physically disabled wife prepares dinner for her husband, recently released from prison for shooting her and severing her spine. The French title translates to a cry for “Help!” and the story demonstrates how literal and emotional confinement affects its protagonist, as she waits for her husband to arrive, and after he announces his intentions towards their still-current marriage. In “The Piano Lesson,” adolescent Jessie visits her piano teacher, Mrs. Womack, on Thanksgiving for her lesson, which was not canceled because Mrs. Womack has nowhere to go for the holiday. The lesson is derailed when Mrs. Womack drinks too much and reveals something about womanhood to Jessie that is age-inappropriate. Despite Jessie’s narrative perspective and Mrs. Womack’s bitterness, I felt as deeply for Mrs. Womack and her sense of the wrongness of the hand she had been dealt in the world, as I felt for Jeanne, the would-be-martyr in “Au Secours.” There is, in these stories as in others, a hint of the grotesquerie and hysteria of Southern Gothic a la Tennessee Williams or Flannery O’Connor, but as if George Eliot pulled at least some of the strings. This is perhaps most apparent in my favorite story of the collection, the poignant and ironic “Famousness,” in which sad, simple Hodder becomes the infatuated caretaker of ambitious would-be actress, sharpshooter, and former beauty queen, Georgianna. The story’s resolution offers a commentary on what we seek in art—and the reader doesn’t get away so easy.

Cherry’s foray in fabulist territory is not as successful as Appel’s. In the story, “A Change of Life,” France is an English teacher at a private school, responsible for managing the school play, which each year retells stories from Greek mythology. This year, as she guides the female students through endless tales of Zeus’ shape-changing in pursuit of sexual satisfaction with mortals, France is going through her own midlife crisis, worrying that she and her wife Philomena’s relationship has grown stale. While the transformation theme of myth and France’s midlife crisis during menopause intertwine nicely, the story ends twice, and the second ending—a conversation between Hera and Zeus about their intervention in the lives of France and Phil—is not foreshadowed well, and stretches suspension of disbelief too far.

These characters struggle with ideas and ideals about femininity that are familiar: beauty, its loss and its lack; economic security; love and romance and sexual fulfillment; career aspirations and the lack thereof; motherhood; aging. Male characters are not entirely neglected, though in this collection they generally play supporting roles. Young Will “Banger” Fitts, son of Plummy Fitts, and the co-protagonist in the opening story, “Will Fitts Finds Out,” is well-drawn, a fatherless child fascinated and frustrated by his ethnic heritage as the grandson of a German engineer who emigrated to Alabama following World War II. Clyde in “Serious Love” also receives almost equal billing to protagonist Lorna Jo, though in some senses they both share the stage with church marquee inspiration, like “FREE TRIP TO HEAVEN! TICKETS INSIDE THE CHURCH!” that seems somewhat arbitrary. This story is more O. Henry than O’Connor  , but I found the swiftly-plotted story of mature lovers quite moving, and Lorna Jo and Clyde—like France and Philomena—an easy couple to root for.

It is a testament to Cherry’s ambition and talent that she has crafted characters about whom readers may feel deeply ambivalent. As both the American flag on the cover and the title suggest, the portraits, though predominantly Southern, reflect some of America’s great diversity in terms of age, sexuality, social class, ethnicity, and ability.